Woops, I got a bit distracted! …

Perhaps one of the most valuable lessons I learnt at university was how to understand my own creative process.  I learnt that, for me, trust in my intuition and allowing time for (subconscious and conscious) processing of ideas are the keys to making resolved work.  My process tends to consist of extended periods of researching, fleshing out thoughts, and testing of processes followed by a flurry of making that usually finishes spot-on my deadline.

Last week I had an idea for a work that I felt was appropriate to enter in a particular art prize.  However, the entries closed at the end of the week so I had less than a week to decide whether the idea was worth pursuing.  To make a work that would potentially end up in a significant exhibition when I’d only spent a couple of days thinking about the idea was a daunting prospect (not to mention that it was of a politically sensitive topic!)  If I hadn’t been doing this residency I don’t think I would have considered it, so perhaps it was the validation of myself as an artist that I have been feeling since being here that saw me plunge into a manic couple of days of making.  I was exhausted once finished, and I’ll admit to being concerned that I may have taken a step in a direction that I didn’t need to go, but it’s done so now I wait nervously for a response.

As a result of all of that thinking and making I didn’t get around to explaining my teabags obsession as promised though, so I’ll give that a go now.

Part of my arts practice, which I haven’t previously mentioned on this blog, involves the making of ceramic vessels for domestic use.  As a maker of such objects I have become interested in consumer culture, in particular how and why people choose, use and discard objects.  My research into consumer behavior has lead me to become more conscious of my own accumulation of personal possessions.  While my previous works on this topic have been focused on my understanding of consumer culture from my perspective as a maker of objects, I recognised this residency as an opportunity to explore the idea in a broader context.

I’ve been interested to develop a work using teabags for some time, and the school environment provided me with an opportunity to collect a large amount of material in a short period of time.  Once the used teabags have been dried and emptied of their contents I am left with small rectangles of paper, each displaying unique colour and patterning.  In the context of this topic teabags have become, for me, a symbol of the proliferation of ‘things’ that surround us that we discard without thought for their value or beauty.  That’s not to say that we should value our used teabags any differently, they are simply a symbol and a material. 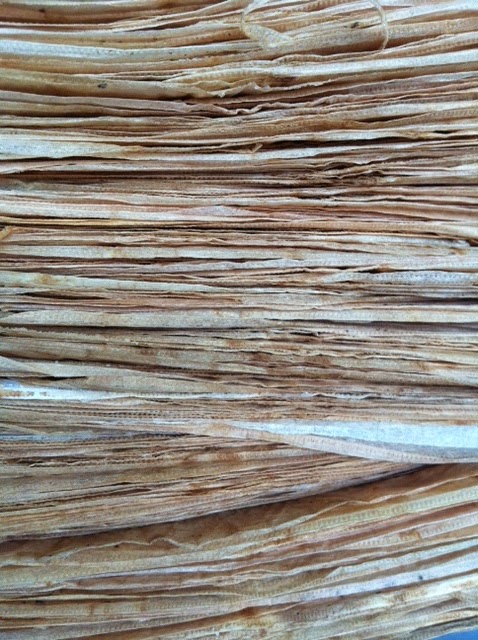 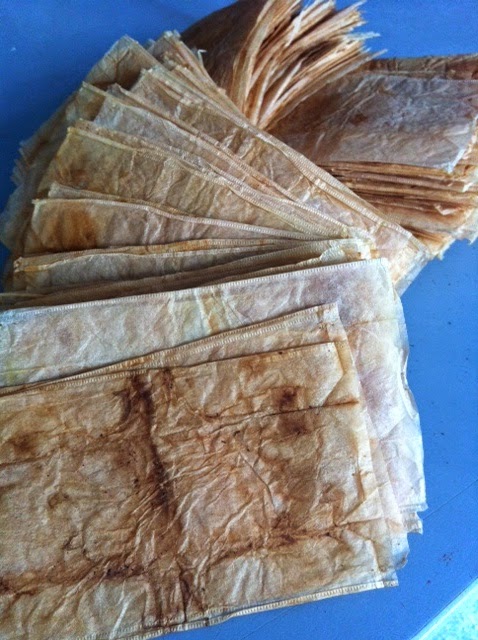 I struggled for a while to decide what form to construct the teabags into as I searched for a suitable reference to consumer culture.  As often happens in my practice it was through experimentation with materials that a link became apparent to me.  I had brought my sewing machine into the studio and was experimenting with sewing teabags into larger sheets when I decided to try to make a small box, referencing the packaging we inevitably bring into our homes containing new possessions.  When pondering over whether or not the work could consist of lots of these, the words ‘little boxes’ began to ring a bell.  Typing ‘little boxes’ into Google I soon found a YouTube clip of a song with that title, recognizing it as the link to consumer culture I had been looking for.

Little Boxes was written in 1962 by Malvina Reynolds in response to what she saw as the homogenization of American consumer culture, in particular the houses built in the post-war era. Reynolds used the term ticky-tacky to describe the cheap materials used to produce masses of rows of homes in the suburbs, a term which entered common language to describe any cheap material.  Responding to the materialistic consumer behavior she was witnessing, Reynolds’ folk song identifies a behavior that continues today: the constant desire for ‘the new’. 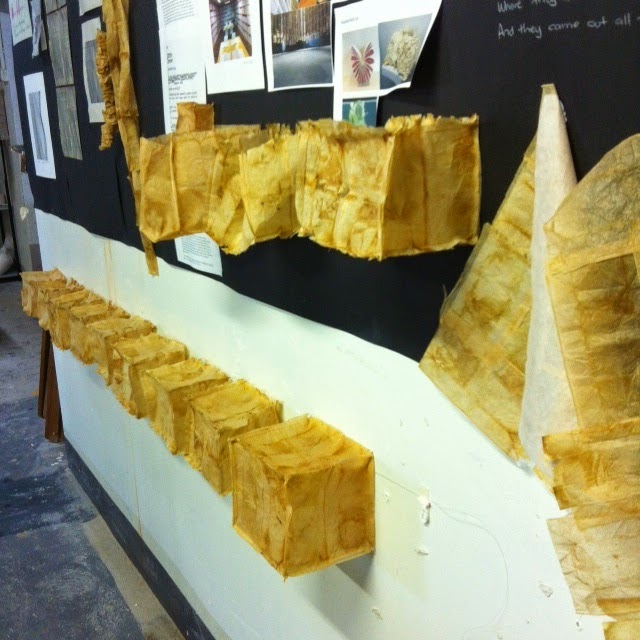 So teabags became my ticky-tacky and I set about making lots of little boxes, representing my observations of current consumer culture just as Malvina Reynolds had done 50 years ago.  Like much of my arts practice I do this to aid my own understanding of the world and, if I’m successful in visually representing the idea, promote others to questioning their own understanding.  As I write I am surrounded by rows of completed boxes and small piles of teabag papers ready to be sewn.  The work will be hung in the Guilford Gallery next week, ready for me to do a floor talk on Thursday.  Everyone is welcome to attend, so please come along at 1pm if you would like to hear more and view the work.
Posted by Serena Rosevear at 18:48 No comments:

Serena Rosevear
I am an interdisciplinary visual artist who works primarily with ceramics, but also chooses materials such as paper, textiles and timber, depending on what is appropriate to the project. A recent graduate of the University of Tasmania (Bachelor of Contemporary Arts (Honours, First Class), 2012) I am currently establishing my studio facilities, with the assistance of an ArtStart grant, while also participating in a residency at St Patrick’s College. I am using my residency opportunity to engage in various material explorations with a view to developing installation work for future exhibition. My practice also includes the making of utilitarian ceramic vessels, a practice which I plan to expand upon once my studio is established. My website is under construction, but further information about my practice can be found on my Facebook page Serena Rosevear - artist